Fourteen young Tory ladies were selected by Major John André as the “foremost in youth, beauty and fashion” in Philadelphia to participate in the Meschianza in May of 1778, a tribute to retiring General William Howe. Among them was...
Bingham, Anne Willing Bond, Williamina (Willie) Britain Cadwalader, General John Childbirth England Franks, Rebecca Friendship Ireland Johnson, Henry (British officer) London Loyalists Meschianza Philadelphia Social life Stony Point Battlefield
From: In the Words of Women on 15 Dec 2018

The Adamses: “quite out of their element”

MARY HILL LAMAR wrote again from London to her brother Henry Hill in Philadelphia this time including a couple of catty remarks about John and Abigail Adams as well as Ann Willing Bingham and her husband, said to be the wealthiest man in America. London,...
Adams, Abigail Adams, John Americans Abroad Bingham, Anne Willing Bingham, William Fashion Hill, Henry Lamar, Mary Hill London Paris Smith, Abigail "Nabby" Adams
From: In the Words of Women on 16 Feb 2017

“the relation of lover and mistress” 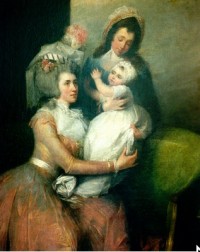 “As soon as I get a bonnet, I shall go to church”

President John Adams created the position of secretary of the navy and appointed Benjamin Stoddert to that post in 1798. Stoddert, a well-to-do merchant from Georgetown, near the the Federal City which was being built, moved with his wife REBECCA LOWNDES...
Adams, Abigail Adams, John Bingham, Anne Willing Fashion Philadelphia Stoddert, Rebecca Lowndes Washington, George
From: In the Words of Women on 25 Apr 2016

“leaders of the Republican Court”

When ANNE WILLING BINGHAM and her husband returned to Philadelphia in 1786 they built a large house, a palatial mansion really, surrounded by gardens, to accommodate the extensive entertaining they planned. The city flourished when it became the capital...
Bingham, Anne Willing Bingham, William Children Entertainments Food Marriage Philadelphia Stoddert, Mrs. Benjamin
From: In the Words of Women on 22 Apr 2016

“too much dissipation and frivolity of amusement”

An article by Margaret L. Brown on Mr. and Mrs. William Bingham in The Pennsylvania Magazine of History and Biography includes several impressions of ANNE WILLING BINGHAM by women that give a good idea of what she was like. Anna Rawle wrote to her mother...
Adams, Abigail Americans Abroad Bingham, Anne Willing Bingham, William Fashion France London Morris, Mary White Paris Philadelphia Rawle, Anna Smith, Abigail "Nabby" Adams Tilghman, Molly Warren, Mercy Otis
From: In the Words of Women on 19 Apr 2016

“too wise to wrinkle their foreheads with politics”

Thomas Jefferson and ANNE WILLING BINGHAM continued their correspondence, he in Paris where he was the American minister and she in Philadelphia where she was a leader of society. In his letter of May 1788 to Anne he makes mention of the developing tensions...
Bingham, Anne Willing French Revolution Jefferson, Thomas Lafayette, Marquise Adrienne
From: In the Words of Women on 14 Apr 2016

“you have buried their good Qualities in the Shade”

ANNE WILLING BINGHAM replied to Thomas Jefferson’s letter of February 1787 (see previous post) fairly promptly. He had asked her to let him know whether she thought a woman’s life in Paris or in America ought to be more admired. Anne waffles...
Americans Abroad Bingham, Anne Willing Fashion France Jefferson, Thomas Paris
From: In the Words of Women on 11 Apr 2016 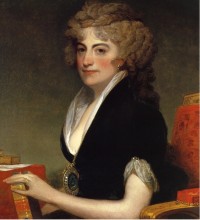 Anne Willing (1764-1801) was one of the most beautiful women in Philadelphia and William Bingham was one of America’s richest men. The two married in 1780 when she was sixteen. The couple traveled to Europe in 1783 where they spent three years impressing...
Bingham, Anne Willing Bingham, William Fashion Jefferson, Thomas Paris
From: In the Words of Women on 7 Apr 2016