Riot at the Richardson House 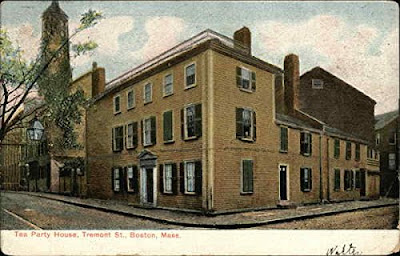 In the 1890s the old Bradlee house at the corner of Hollis and Tremont Streets became known as the “Tea Party House.” Until it was leveled in 1898, it was on lists of what tourists should see in Boston. Even after that, people sold souvenir...
Benjamin Russell Boston Tea Party children David Bradlee historical fiction myths political organizing remembering the Revolution riots Sarah Bradlee Fulton women
From: Boston 1775 on 21 Nov 2019

If there’s not enough evidence to say David Bradlee participated in the Boston Tea Party of 1773, I don’t know what he did between the collapse of George Gailer’s lawsuit in late 1771 and the start of the war.When Bradlee resurfaces...
artillery David Bradlee economy food Freemasonry Henry Knox Jeremy Belknap Paul Revere privateers Thomas Crafts Thomas Melvill town government William Burbeck
From: Boston 1775 on 21 Nov 2019

“A family mansion with a history of the stirring times”

Yesterday I quoted a letter that appeared in the Boston Evening Traveler on the day after the centenary of the Boston Tea Party. It described how a young woman named Sarah Bradlee helped prepare her four brothers and future husband to disguise themselves...
Alexander Leslie Boston Tea Party British soldiers Castle William clothing David Bradlee espionage Medford myths remembering the Revolution Sarah Bradlee Fulton women
From: Boston 1775 on 19 Nov 2019

The Bradlee Family and the Tea Party

Last week I discussed David Bradlee, a tailor who showed up at three violent episodes in Boston within five months of late 1769 and early 1770.Bradlee has also been linked to the Boston Tea Party, along with his brothers, brother-in-law, and sister Sarah....
Boston Tea Party David Bradlee Medford myths Peter Harrington remembering the Revolution Sarah Bradlee Fulton Watertown women
From: Boston 1775 on 18 Nov 2019 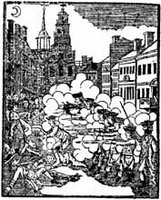 David Bradlee: “Windows broke when I got there” 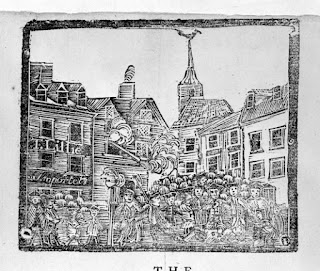 We’ve come to the last of the men George Gailer sued for tarring and feathering him in October 1769, the man his legal filing identified as a “Taylor” named “David Bradley.” As it happens, David Bradlee was one of the first...
Chelsea children David Bradlee Dorchester Ebenezer Richardson George Gailer John Adams language law riots Robert Treat Paine sestercentennial events weapons women
From: Boston 1775 on 14 Nov 2019

“An assault, on the Body of the said George Gailer”

Paging through the Town of Boston’s Tax Records