Historic Structures and Sites Worth Preserving? The Extraordinary Life of Isaac Grant of Judea, Connecticut 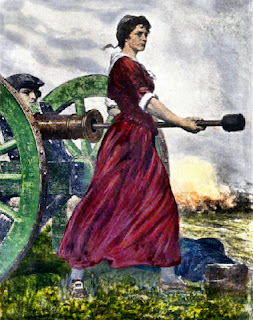 Since I was on a Battle of Monmouth kick, I’ll jump to one of the most enduring American legends to come out of that fight: Molly Pitcher. As Ray Raphael wrote in Founding Myths and this article for the Journal of the American Revolution, there’s...
artillery deathways Fort Washington Germans Joseph Plumb Martin Magarert Corbin Mary Ludwig Hays Molly Pitcher Monmouth myths women
From: Boston 1775 on 27 Aug 2016

A Dutiful Soldier Misses the Battle

We sometimes use the phrase “at the right place at the right time” when describing the circumstances of someone’s good fortune. In war, the “right place” is often the place where the most important events were not happening. That sounds convoluted,...
Fort Lee Fort Washington Pennsylvania Flying Camp Shorts
From: Journal of the American Revolution on 9 Feb 2015

View from Somewhere in the Bronx “This is a most unfortunate affair and has given me great Mortification as we have lost not only two thousand Men that were there, but a good deal of Artillery, & some of the best Arms we had.” So wrote General George Washington to his brother...
Charles Lee Fort Lee Fort Washington George Washington New York Scholarship William Howe
From: Journal of the American Revolution on 23 Apr 2014