Struggle for a Lighthouse: The Raids to Destroy the Boston Light In the days following the British pyrrhic victory of Bunker Hill on June 17, 1775, Gen. George Washington, in his new role as commander-in-chief,... The post Struggle for a Lighthouse: The Raids to Destroy the Boston Light appeared first on Journal of...
Boston Boston Light Features Gaspee Affair Horatio Gates Lighthouses Royal Navy The War Years (1775-1783)
From: Journal of the American Revolution on 5 Jul 2018

The Conspiracy to Destroy the Gaspee With but few exceptions,[1] it has usually been surmised by historians that the 1772 attack on the Royal Navy schooner Gaspee was a spontaneous... The post The Conspiracy to Destroy the Gaspee appeared first on Journal of the American Revolution.
Committees of Correspondence Features Gaspee Affair Prewar Conflict (<1775) Rhode Island
From: Journal of the American Revolution on 8 Mar 2018

Next JAR Book: The Burning of His Majesty’s Schooner Gaspee by Steven Park The Traditional Narrative of the Gaspee Affair Patriot fervor seemed to have cooled in the months and years following the Boston Massacre in 1770. All of the taxes of the 1760s had been repealed, save on tea, and the famous Boston Tea Party was still...
1772 Gaspee Affair Rhode Island Scholarship
From: Journal of the American Revolution on 28 Jul 2015 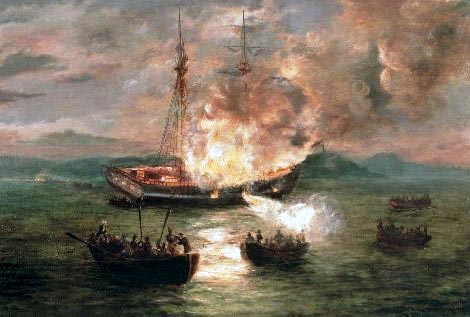 The Gaspee Affair occurred on June 9, 1772. The HMS Gaspee, a British customs ship, ran aground in Rhode Island and a Sons of Liberty group attacked and set fire to the ship. The British Government threatened to send the American perpetrators for trial...
British Parliament Gaspee Affair Laws Revolution Rising
From: 18th-century American Women on 1 Aug 2013