The official Rhode Island response to the destruction of the Customs sloop Liberty in Newport harbor started even before the ship went up in flames.  A mob attacked the ship on 19 July. Two days later, this proclamation appeared, as printed in the...
Connecticut crime Customs service Joseph Packwood Joseph Wanton law Liberty riot Rhode Island sestercentennial events William Reid
From: Boston 1775 on 22 Aug 2019 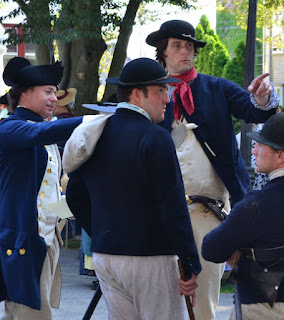 On Saturday, 24 August, the Newport Historical Society will host a living-history exploration of “Life During the Burning of H.M.S. Liberty.” This is the society’s Sixth Annual Living History Event, and its presentations bring in top-notch...
handcrafts Joseph Wanton Liberty riot non-importation remembering the Revolution Rhode Island riots shipping women
From: Boston 1775 on 21 Aug 2019

Recreating the Aftermath of the Gaspee in Providence, 2 June

New Study of the Gaspée Incident

John Howland and the Lexington Alarm in Providence

Elkanah Watson and the Lexington Alarm in Providence

I previously quoted the part of Elkanah Watson’s Men and Times of the Revolution in which he described his military training as a schoolboy in Rhode Island. Watson, born in 1758, was still a teenager when the Battle of Lexington and Concord occurred....
Elkanah Watson James Varnum Joseph Nightingale Joseph Wanton Lexington militia myths Nathanael Greene Rhode Island
From: Boston 1775 on 21 Apr 2016