Your search for posts with tags containing Louisbourg found 11 posts 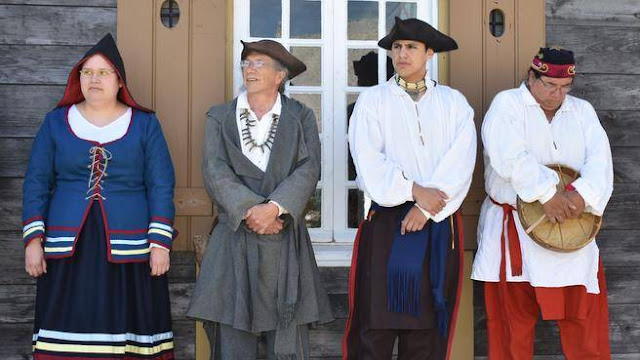 A young Mi’kmaq woman, left, will stroll the streets of the national historic site attired in traditional dress. The dress was made by a group of women from Potlotek First Nation.http://thechronicleherald.ca/artslife/1579583-potlotek-women-create-model-18th-century-mi%E2%80%99kmaq-dress
18th century Fortress of Louisbourg Historical living history Mi’kmaq
From: A Woodsrunner's Diary on 23 Jun 2018

While the mainstream media is busy covering yesterday's referendum on Scottish independence, here at Charlevoix we have Nova Scotia aged rum on the mind.  Rum, indeed, is returning to the Fortress of Louisbourg in a big way for...
Louisbourg
From: Charlevoix on 19 Sep 2014

I agonized over whether to blog about this or not over the last week.  Sotheby's was offering up in its December 5th sale two significant documents.  The first was a lovely manuscript map of Louisbourg by a certain sieur Lartigue,...
Echères/Auctions Louisbourg
From: Charlevoix on 7 Dec 2013

Forts in the News

Over in Sunbury, Pennsylvania, an outdoor model of Fort Augusta was dedicated last weekend.  Turning to Wikipedia in order to look up some basic facts about the fort's history, I was amused to learn that "Fort Augusta was a fat...
Forts Louisbourg Musées/Museums
From: Charlevoix on 15 Nov 2013