Your search for posts with tags containing Upholsterer found 9 posts

What was advertised in a colonial American newspaper 250 years ago today? “Beds and window curtains in the newest taste, as practised in London.” An array of merchants and shopkeepers placed advertisements for imported goods in the December...
Daily Advert Update George Richey London Fashions New-York Gazette and Weekly Mercury Newest Fashion Upholsterer
From: The Adverts 250 Project on 17 Dec 2020

What was advertised in a colonial American newspaper 250 years ago today? “He may take the LIBERTY of craving the continuance of their favours.” John Mason, an upholsterer who ran a shop at the Sign of the Crown and Cushion in Philadelphia,...
Daily Advert Update John Mason Liberty Pennsylvania Gazette Politics Property Upholsterer
From: The Adverts 250 Project on 29 Nov 2020 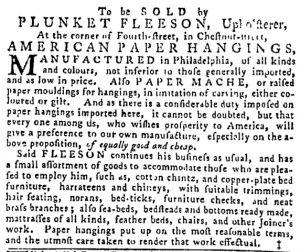 What was advertised in a colonial American newspaper 250 years ago today? Pennsylvania Chronicle (December 14, 1767).“Webster has had the honour of working, with applause, for several of the nobility and gentry.” John Webster, an “Upholsterer...
Buzz Daily Advert Update John Webster Pennsylvania Chronicle Prominent Clientele Upholsterer
From: The Adverts 250 Project on 14 Dec 2017

What was advertised in a colonial American newspaper 250 years ago this week? New-York Journal (September 3, 1767).“BLANCH WHITE, UPHOLSTERER FROM LONDON.” Colonists lived in an era of intense geographic mobility. In the decade before the...
Blanch White Daily Advert Update Experience From London New-York Journal Upholsterer
From: The Adverts 250 Project on 6 Sep 2017

What was advertised in a colonial American newspaper 250 years ago today? Pennsylvania Gazette (July 9, 1767).“He finds it necessary to reduce the several Prices of his Work one third Part lower than formerly.” Upholsterer John Mason placed...
Daily Advert Update John Mason Price Reduction Prices Listed in Advertisement Sale Upholsterer
From: The Adverts 250 Project on 9 Jul 2017