Your search for posts with tags containing Witchcraft found 149 posts

Dr Victoria Flood (University of Birmingham) will be visiting The University of Australia later this month. Dr Flood’s visit is supported by the Institute of Advanced Studies and Medieval and Early Modern Studies at UWA. As well as being one of the...
ANZAMEMS ANZAMEMS lecture early modern witchcraft lecture History of place lecture lecture member news mems UWA medieval and early modern lecture Victoria Flood Witchcraft lecture
From: ANZAMEMS Inc on 15 Aug 2022

Doubt, Decency, and the History of English Witchcraft

Posted by Krista J. Kesselring, 26 July 2022. Some myths about the past float entirely free of the evidence, but some have just enough grounding in the documentary record to be particularly persistent. Witchcraft is mired with myths of both sorts....
crime medicine Star Chamber Uncategorized witchcraft witches women and the law
From: Legal History Miscellany on 26 Jul 2022

Posted by Tom Johnson, 6 June 2022. On a Sunday night in August 1465, a group of people gathered in the village of Bunwell – about 15 miles southwest of Norwich, to summon an “aerial spirit,” in the hope that it would lead them to buried treasure....
animals crime forfeiture magic malice property secrecy theft treasure trove Uncategorized witchcraft
From: Legal History Miscellany on 6 Jun 2022

The Australian and New Zealand Association for Medieval and Early Modern Studies is hosting a hybrid online and at the University of Western Australia for it’s 13th biennial conference, with the topic “Reception and Emotion”. Ceræ is accepting...
anza2022 ANZAMEMS ANZAMEMS 2022 conference Cerae cfp conference medieval and renaissance studies panel reception and emotion witchcraft
From: ANZAMEMS Inc on 10 Nov 2021

The Making of Witch City, part Whatever

So many people, events, ideas, circumstances, and general forces went into the transformation of Salem, a dynamic manufacturing city that while never altogether embarrassed by its infamous witch trials was still reluctant to exploit them, into a tourist...
Collecting Colonial Era Historic Houses History Salem Salem Jail Salem witch trials Tourism Witch City Witchcraft
From: streets of salem on 30 Jul 2021

The Magiconomy of Early Modern England

The Magiconomy of Early Modern England On the night of 8 April 1693, a burglar broke into Thomas Masterman’s house in Stokesley, making off with the hefty sum of £2 10s. To identify the thief and reclaim his money, Masterman trekked south through the north Yorkshire moors to Byland...
defamation Forms of Labour magic Research soothsayers witchcraft
From: Forms of Labour on 4 Nov 2020

A Victorian View of Salem Witchcraft

I had not thought about the prolific and pioneering author Harriet Martineau (1802-1876) for years: until I encountered a portrait of her by the Salem artist Charles Osgood in the Catalog of Portraits at the Essex Institute (1936). I was looking...
#SalemSuffrageSaturday books Charles Wentworth Upham Harriet Martineau History Salem Salem witch trials Spiritualism Victorians Witchcraft Women's History
From: streets of salem on 29 Aug 2020

Enlightenment-era Ghosts and the History of Technology 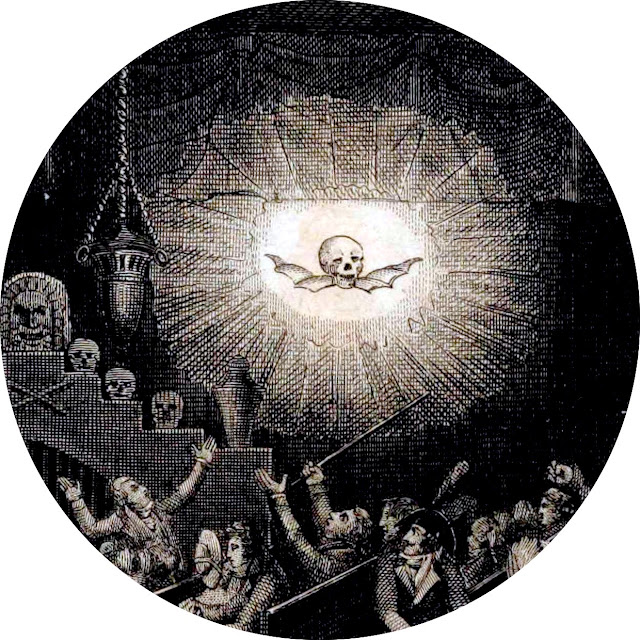 A detail of one of Etienne Gaspard Robertson's "phantasmagoria."Ghosts were in the air in eighteenth-century London. Few knew this better than James Boswell, the friend and biographer of Samuel Johnson. On a gloomy Saturday in March of 1762, feeling “cold...
Eighteenth century Ghosts Magic Marvels Witchcraft
From: Res Obscura on 30 Oct 2019

In the 1613 pamphlet Witches Apprehended, Examined and Executed, a servant gossips about a local woman he believes to be a witch. As he speaks, he is struck by a […]
Apotropaia Dreams Early Modern Emotions Events Guest Posts Magic Material Culture Publications Theatre Witchcraft
From: Inner Lives on 16 Sep 2019

Posted by Krista J. Kesselring, 30 June 2019. Most of what we know of accusations of felony witchcraft in early modern England comes from the few surviving assize court records, supplemented by printed news pamphlets that detailed some such trials. Judges...
assizes maps pardon Uncategorized witchcraft witches women and the law
From: Legal History Miscellany on 30 Jun 2019

There are many stories of witchcraft in rural England from the nineteenth and twentieth centuries, but it is rare to find accounts of self-professed witches who actually attempted to make […]
Animals Early Modern Guest Posts Historiography Magic Modern Publications Witchcraft
From: Inner Lives on 17 Apr 2019

The 1612 Pendle witch trials in Lancashire began when the peddler, John Law, refused to sell his pins to Alizon Device. Following the encounter, Law was stricken with a sickness […]
Animals Early Modern Guest Posts Magic Publications Reviews Witchcraft
From: Inner Lives on 9 Apr 2019

The Routledge History of Medieval Magic: Reflections on a Big Editing Project